LivingWithPurple Flour and Flowers | A Kitchen and Garden Blog

Thanksgiving was yesterday, but Calin and I celebrated with his family, which this year meant that I didn’t cook anything.  I showed up in my apron and looked busy staying out of the kitchen while everyone else did the hard work.  We did bring cream cheese and some of my pepper jelly as appetizers for the chefs and onlookers, which I suppose counts for something…

Don’t worry – we are doing my family’s Thanksgiving on Sunday, so I’ll have loads of things for you next week. But since I didn’t do any of my own chefing, I don’t have a real Thanksgiving post for you today.  But I don’t want to leave you with nothing to read on this beautiful no-work Friday, with your full tummies and relaxing souls, so here’s another episode of Pumpkin Love.

Continuing my fall obsession with pumpkin, I found this fantastic recipe for pumpkin chili.  This is perfect because 1) chili is the easiest, tastiest soup I know, and I make lots of it in cold weather, and 2) it has pumpkin in it, which makes it feel even more seasonal.  I wasn’t 100% sure how the flavors would work out, since I don’t usually combine pumpkin with savory things (other than ravioli, which I haven’t made but I really want to), but love of pumpkin and love of chili combined to make this something I just had to try. 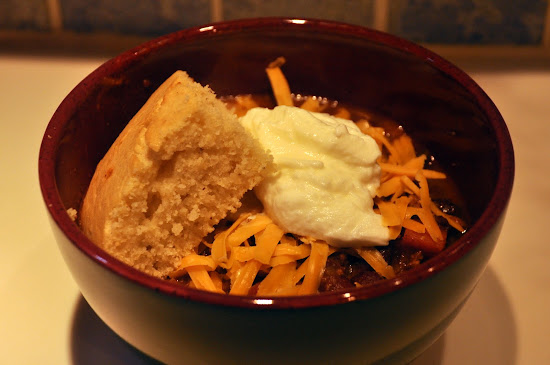 Unfortunately, the weekend didn’t quite go as planned, and I didn’t have an evening where we would actually be home to eat chili! So I decided to make it as an all-day crockpot extravaganza and have a week night dinner instead.  This, of course, meant that I had to modify the original recipe, because it was designed for real cooking rather than slow cooking.

And then, of course, I had to modify the ingredients.  Because that’s what I do. And also because I didn’t have some of them.  Like cumin, apparently.  What on earth happened to my cumin?  But what I did have (Okay, that’s a lie.  I didn’t have it.  I went out of my way to get it.) was Southern Tier Pumking Ale.  Which just happens to be my current favorite pumpkin seasonal beer (and there are a lot of excellent choices out there, so that’s saying something).

(They also make my favorite dessert beer – Mokah.  Seriously.  Check out this brewery.  And then find somebody to share with, because 22 oz of beer is a lot.  Especially when it’s the kind of beer you should be drinking from a cordial glass.  But I digress.) 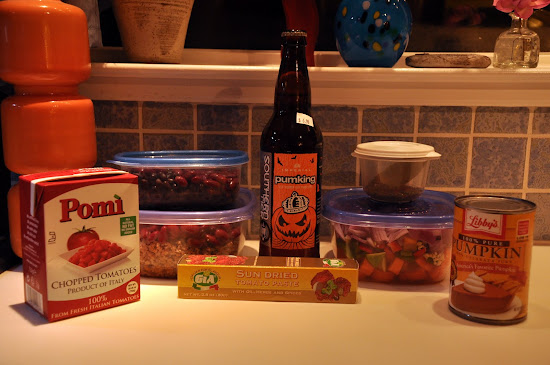 Where was I?  Oh, right.  So I had the beer.  And I didn’t have cumin, but I had chili powder, and that’s how you make chili, right?  And I had beans (the recipe called for black beans, but I think chili needs kidney beans, so I added those too), and ground turkey (have I mentioned I don’t “do” ground beef?), and all sorts of other exciting things.  So I pulled everything out and got started.

Since I wanted to get everything ready ahead of time, I cooked up the turkey with some spices, and left that to cool a bit while I chopped up my carrots, peppers, garlic and onion.  (Oh onions.  I chopped half and nearly died crying, so when I came back for round two, I armed myself with Calin’s racketball safety glasses.  They weren’t a tight fit, but they seemed to cover enough of my eyes to do the trick.  I really wish I was one of those people who doesn’t react to onion fumes.) I washed the beans and stuck them in a container, then I measured out all my spices and put them in their own container.

Everything prepackaged I left as-is.  I figured it takes about 30 seconds to open a can and scoop things out, or to pour something.

Next morning, I woke up about 5 minutes earlier than usual and dumped everything in the crockpot.  I pretended to be strategic – I put the raw veggies in first, so they’d be closest to the heat.  But really, when things are cooking for 6-8 hours, how much does that matter?  Everything worked perfectly except volume.  Turns out that using 1 1/4 lbs turkey instead of 1 lb, and 2 cans of beans instead of 1, means your crockpot is full to the brim.  Which means you can’t stir it very well.  Oops.  So I just poked around a bit with my spoon, set the crockpot on high for 4 hours, and let it be. 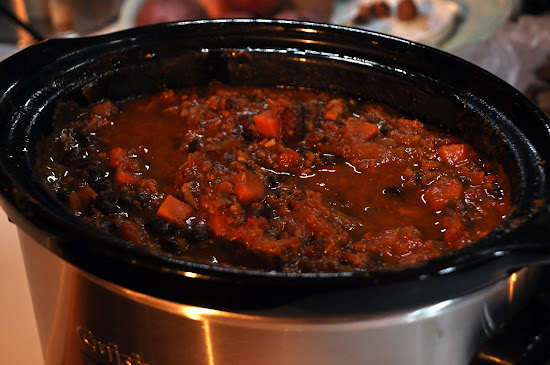 Calin ended up coming home a few hours early, so he was able to stir things a little then, which was good, because it did try to explode a bit. Mmm, chili-splashed counter.  But things softened up nicely, and after stirring a few more times, it was ready to be et.  But first, there was an essential meal ingredient missing.  Cornbread!  You can’t have chili without cornbread.  Or at least I can’t.  So, I left the crockpot on warm, and baked up a quick batch using my new old faithful best ever cornbread recipe.  (Which, coincidentally, I posted with chili last time, too.)

40 minutes later (it’s a good thing we had pumpkin bread to snack on!), I served us up. 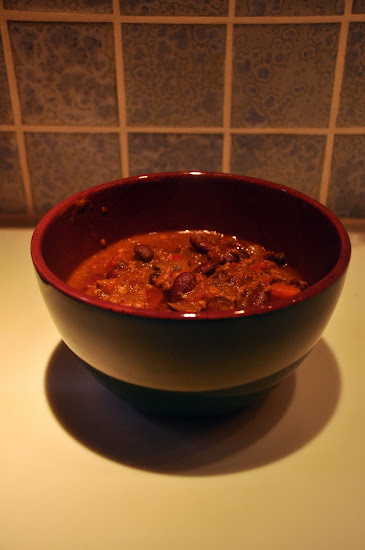 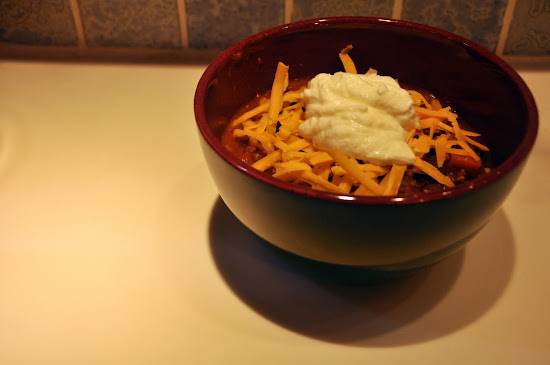 ** If you are making the chili now, move on to the next step.  I wanted to start the chili in a crockpot before work the next morning, so I packaged up all of my ingredients (meat and beans in one, veggies in one, spices in one) and stuck them in the fridge overnight.  The next morning, they were ready to go when I was.

Note: Chili is delicious fresh out of the crockpot, but it is even better a day or too later, so make enough for lots of leftovers!  It also makes an easy packed lunch – you can reheat it in tuperware, or heat it first and send it to work/school in a thermos soup container.

Are you looking for me?

Things I Write About

A Selection of Other Blogs I Frequent